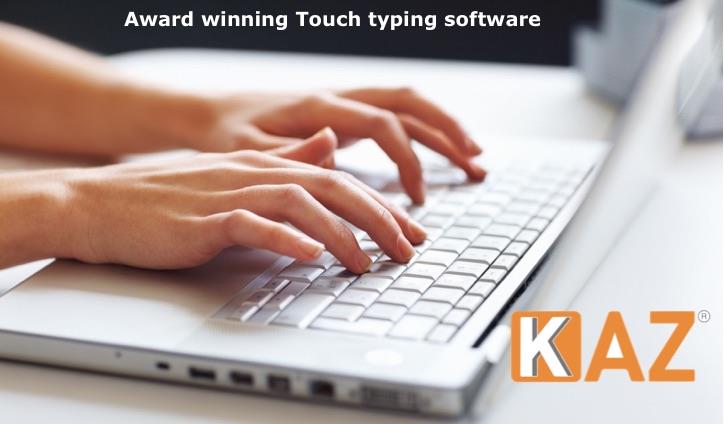 The answer is simple.

According to spokesmen at the UK’s Learndirect, the US’s Opensesame, and learning partner jooble, typing was one of the most overlooked and undervalued courses in the marketplace. However, we are pleased to confirm that this trend is now in reverse.

“KAZ taught me to touch-type as a 9yo! KAZ was the best software my dad ever bought for us as kids! Being able to touch-type at very fast speeds has served me well in life! I had to take a typing test as part of a job application and the administrator made me take it a second time because he didn't believe I was really typing that fast! I was typing at around 120wpm and he said he had never seen anybody do more than 100. All thanks to KAZ!”   Hannah Jones - 08/11/2019

Learning this skill can be quick and easy with KAZ’s inclusive touch typing software. The proven Accelerated Learning teaching method, which teaches the A – Z keys in just 90 minutes was developed through science and has been tried, tested, proven and endorsed by the Open University, who wrote a white paper on its effectiveness in 2000.

Typing amounts to a significant portion of time spent at a computer; composing documents, writing emails, searching for information, or compiling information.

Touch typing is a typing technique where keys are located and pressed on the keyboard by the sense of touch rather than by sight.

If you work in front of a computer regularly and type with just two or a few fingers, you will know how long it can take you to type just a simple document. Imagine if it took you less than half the time, without any loss in the quality of your work.

So, to sum up reasons for touch typing?

1. Speed: The most obvious benefit of touch typing is increased typing speed. While average typists type at about 10 to 20 words per minute, touch typists can comfortably type at upwards of 60 to 70 words per minute. Not having to look down at the keyboard is the added advantage, as not only can you concentrate fully on the screen, you can also see and rectify mistakes faster.

2. Time: Increased typing speed means it will take you less time to type. Additionally, not having to shift between the screen and the keyboard saves you time, as will quick error rectification. A study has revealed that touch typists can save up to 25-30% of their work time compared to those without this skill.

3. Accuracy: Touch typing doesn’t just focus on speed, but on accuracy as well. Learning to type faster also involves making fewer mistakes, whether syntactically or grammatically, and the confidence borne out of this improved accuracy is almost always reflected in your work.

4. Health: Typing, like any other work can be exhausting, both physically and mentally. Physically, typing usually involves you sitting in one position, bent over the keyboard for extended periods of time. Mentally, a lot of energy is expended in shifting focus from the screen to the keyboard and looking for the correct keys to press. Touch typing correctly not only speeds up the process but also though good practise, ensures you are sitting with good posture and using all fingers and thumbs. Typing correctly reduces and eliminates the risk of Repetitive Stress Injuries (RSI).

These are just five simple benefits enjoyed by touch typists over those untrained in this skill.

As Hannah Jones found out, touch typing is a hugely valuable skill to have in your repertoire. So, when applying for your next job via jooble be ready, have this skill  in place. KAZ will teach you the a-z keys in just 90 minutes, plus practice time.

It’s the one skill which could really change your life and save you that most valuable commodity of all, time!